A hockey player paralyzed in the Humboldt Broncos bus crash in Saskatchewan last April plans to head to Thailand in his quest to get better.

Ryan Straschnitzki of Airdrie, Alta., plans to undergo an experimental surgical procedure on his spine that he hopes can restore some movement below the level of his injury.

“It’s kind of cool. Turning humans into robots,” the 19-year-old said with a laugh in a recent interview with The Canadian Press.

Straschnitzki and 12 others on the junior hockey team were injured when a semi truck blew through a stop sign and into the path of the team’s bus last April. As well, 16 people died.

Straschnitzki was paralyzed from the chest down. Although he has been going to physiotherapy regularly and has taken up sledge hockey since the life-changing accident, he hopes the surgery might help him improve his daily life.

An epidural stimulation implant would be placed in his back. With the use of a small device like a remote control, the implant sends electrical currents to the spinal cord to stimulate nerves and move his limbs, bypassing traditional pathways. 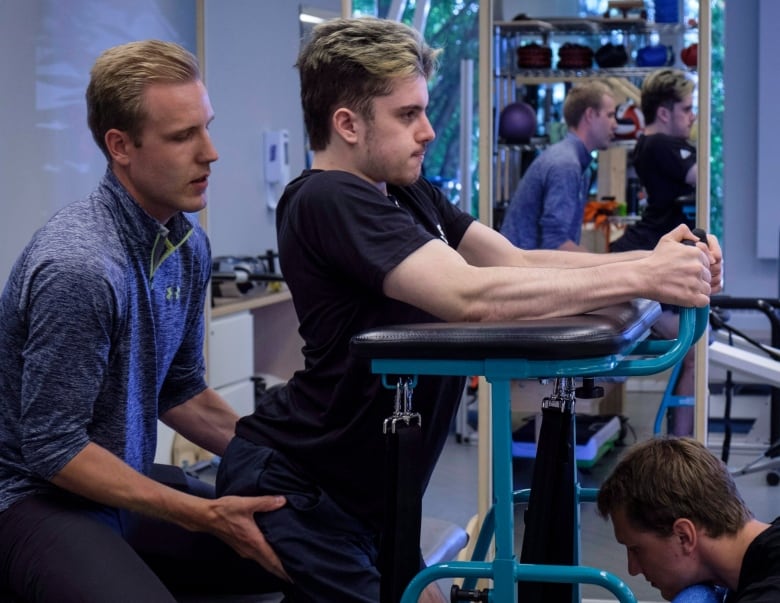 Straschnitzki, of Airdrie, Alta., right, has been attending physio regularly since the accident. (Jeff McIntosh/Canadian Press)

The implant can be programmed to stimulate certain nerves mapped out by surgeons and therapists.

“Just getting some core muscles back would be awesome.”

Straschnitzki was inspired to try the procedure by Dr. Richi Gill, a Calgary surgeon who had the operation last year after he was paralyzed in an accident.

Only a half-dozen people in Canada have had it done abroad and only about 30 worldwide.

The executive director of the Synaptic Spinal Cord Injury and Neuro Rehabilitation Centre in Calgary said Straschnitzki could be in Thailand in April or May. He would stay there between four and six weeks.

“Ryan is certainly a prime candidate for a procedure like this. So once we finish communicating with Thailand, Ryan should be approved to go ahead with the procedure,” Uyen Nguyen said.

“The sooner this could happen the better.”

Nguyen cautioned it isn’t a cure, but it is new therapy that’s growing in popularity. The surgery is relatively straightforward.

“It is a device that goes over the spinal cord and sends messages out to the rest of the body,” she said. “It is the rehab afterwards that is arduous and tedious and that’s where Ryan’s strength and fortitude comes in. You have to commit.”

The surgery can cost up to $100,000 and isn’t covered by health care or insurance. It is also performed in countries such as the United States and Switzerland, but it’s much cheaper in Thailand.

Straschnitzki’s parents say it’s worth it.

“The possibility is he could walk and get out of that wheelchair. That’s the main thing right there,” said Tom Straschnitzki.

“I just don’t want to get up any false hopes,” she said. “I think he’s going in with a very strong attitude and, provided everything goes well, I think the sky’s the limit for him.”

Ryan Straschnitzki said he is a bit nervous but will cope with his jitters.

“I mean there’s always going to be nerves with everything you do and I think I just have to overcome that — keeping that positive mind set, pushing myself every day and having the hope that I can walk again.”

How to Think About SEO