U.S. President Donald Trump is threatening to slap tariffs on cars produced in Mexico unless the country does more to stop migrants trying to enter the U.S.

Trump told reporters at the White House on Thursday that if the “powerful incentive” but “less drastic measure” doesn’t work, he’ll go through with his standing threat to close the U.S.-Mexico border.

The Republican president had threatened last week to close the border this week unless Mexico immediately halted “ALL illegal immigration coming into the United States.” He has since praised the country for doing more.

Trump is also threatening tariffs if Mexico doesn’t halt the flow of illegal drugs across the border. He says he’s giving Mexico “a one-year warning” to comply. 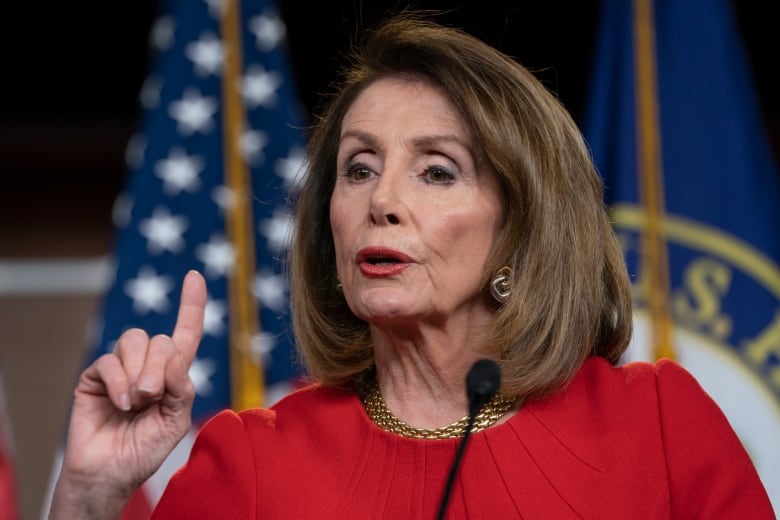 Speaker of the House Nancy Pelosi says the House of Representatives will sue to block Trump’s plan to redirect funds to building a wall along the border with Mexico. (J. Scott Applewhite/Associated Press)

But he also said Mexico was working to change the situation.

“A lot of good things are happening with Mexico,” Trump told reporters at the White House.

“Mexico understands that we’re going to close the border, or I’m going to tariff the cars.”

Trump warned last Friday that he would close the U.S. border with Mexico this week unless Mexico took action to help stop the flow of illegal migrants across the frontier.

Trump said Thursday that media coverage in recent days has prompted Mexico to make moves to curb the flow of immigrants to the United States and to take other actions to ease the pressure on U.S. ports of entry.

At the same time, the U.S. House of Representatives is threatening to sue to block Trump’s transfer of money to pay for a border wall along the border with Mexico, House Speaker Nancy Pelosi said Thursday.

Trump declared a national emergency at the border in February to secure the money that Congress refused to give him for the wall.

“The President’s action clearly violates the Appropriations Clause by stealing from appropriated funds, an action that was not authorized by constitutional or statutory authority,” Pelosi, the top Democrat in Congress, said in a statement.