Federal Conservatives made a pitch today — in the wake of the SNC Lavalin affair — to turn the criminal case against Vice-Admiral Mark Norman into the spinoff political scandal of the spring.

While the pace of the SNC-Lavalin scandal could start slowing down now, following the ejection of both former justice minister Jody Wilson-Raybould and former Treasury Board president Jane Philpott from the Liberal caucus this week, Conservatives effectively served notice Friday that they’re not letting the Liberal government off the hook over allegations of political interference in criminal cases.

“We aren’t going to turn the page on the rule-of-law corruption from this government,” former Conservative veterans minister Erin O’Toole said Friday as debate began on an opposition motion which, among other things, repeated a demand that the federal government cover Norman’s legal bills.

The motion also insisted that senior political staff and bureaucrats around Prime Minister Justin Trudeau sign “an affidavit affirming that no evidence or records” related to the criminal case against the former vice chief of the defence staff have been destroyed.

The Conservatives have made similar demands before as they’ve pressed the Liberal government to account for inconsistencies and allegations of political interference in the prosecution of Norman, who faces a single count of breach of trust.

The Crown accused of him of leaking cabinet secrets to a shipyard executive and a CBC journalist related to a $668 million deal to lease a supply ship for the navy.

Former justice minister Jody Wilson-Raybould referenced the Norman case in her secretly-recorded conversation with  Clerk of the Privy Council Michael Wernick, suggesting alleged attempts to interfere in SNC Lavalin’s prosecution could taint the public’s perceptions of both the extradition of Huawei executive Meng Wanzhou and the Norman case.

‘This is worse than the SNC-Lavalin scandal’

“Canadians should be outraged,” said O’Toole.

“This is worse than the SNC scandal … you may have issues with a company and bad practice by a company, but here is a Canadian who gave three decades of his life to his country, and before that grew up in a family serving the country, who is being hung out to dry.”

The parliamentary secretary for the justice minister, Arif Virani, responded — as the government has before when faced with questions about the Norman case — by chastising the opposition for talking about a matter still before the courts.

Norman’s lawyers will be back in court in two weeks to resume their fight for access to federal government documents to prove their theory that his prosecution is politically motivated.

The federal government has released a few thousand pages of internal documents, but many pertinent ones — including Wernick’s 60 page memo on the case to Trudeau — have been redacted due to solicitor-client privilege. 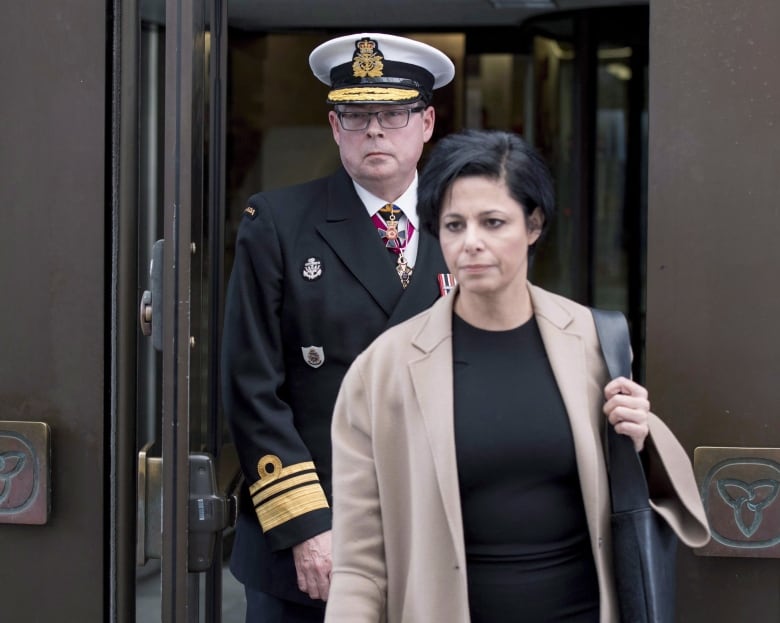 Vice-Admiral Mark Norman follows his lawyer Marie Henein as they leave the courthouse in Ottawa following his first appearance for his trial for breach of trust, on Tuesday, April 10, 2018. (Justin Tang/THE CANADIAN PRESS)

The Conservatives repeatedly have sought assurances that government documents related to the case have not been destroyed. They’ve attempted to connect the handling of Norman’s case against Norman with a scandal that erupted in Ontario over the cancellation of gas plant construction under the former Liberal government of Dalton McGuinty. Government records were destroyed in the course of that scandal.

O’Toole pointed out that many of Trudeau’s government’s current and ex-senior advisers served in the McGuinty government, or its successor under former premier Kathleen Wynne.

“That was the same crew that brought us the billion-dollar scandal in Ontario,” he said.

Matthew Matchett is also charged with breach of trust. He is accused of leaking a cabinet memo and slide deck presentation to an Ottawa lobbyist working for one of the shipyards before a meeting on Nov. 19, 2015, while Norman is alleged to have disclosed the results of the secret discussions

O’Toole insisted that Norman was the “only one [that] has been set up as the fall guy.”

The opposition motion will be voted on next week.


SNC-Lavalin, the company at the centre of a national political storm, underscores what it calls new and troubling facts in a fresh court bid for a special agreement to avoid prosecution on corruption charges.

The Montreal-based engineering and construction firm cites revelations from recent parliamentary-committee testimony in trying to revive its Federal Court case against the director of public prosecutions.

SNC-Lavalin is asking the Federal Court of Appeal to give it another chance to challenge the director’s decision to not negotiate an agreement that would see the company avoid a criminal trial and a possible prohibition from receiving federal contracts for 10 years.

In a March ruling, the Federal Court tossed out the company’s plea for a judicial review of the 2018 decision.

SNC-Lavalin faces prosecution over allegations it paid millions of dollars in bribes to obtain government business in Libya.

The company unsuccessfully pressed the director of prosecutions to negotiate a “remediation agreement,” a means of holding an organization to account without formal criminal proceedings.


A day after the United States called on its allies fighting in Syria and Iraq to bring their foreign fighters home for prosecution, Canada is insisting it will not put its citizens at risk to answer the call.

“We have heard the request, or the suggestion, from the United States, but at this point, the fact of the matter remains that is a dangerous and dysfunctional part of the world in which we have no diplomatic presence and we are not going to put our diplomatic officers or consular officials at risk,” Public Safety Minister Ralph Goodale said Tuesday.

Goodale said Tuesday that Canada is still working with its allies in the Five Eyes intelligence sharing network (Australia, Britain, New Zealand and the U.S.) to gather evidence that can be used to convict Canadians who went abroad to join ISIS — but he said he would not risk Canadian lives to do so.

“The issue is in part working with our allies to make sure that we are collecting the maximum amount of useable evidence that can be practically available and useable in the justice system to lay charges, to prosecute,” he added.

As the U.S. prepares to withdraw its remaining troops from the region, the U.S. Department of State issued a statement Monday that said the Syrian Defence Forces have taken custody of hundreds of foreign fighters from countries all around the world.

“The United States calls upon other nations to repatriate and prosecute their citizens detained by the SDF and commends the continued efforts of the SDF to return these foreign terrorist fighters to their countries of origin,” the statement said.

According to Amarnath Amarasingam, a senior research fellow at the Institute for Strategic Dialogue who has been to Syria to visit camps where foreign fighters are being held, there are currently four Canadian men, three women and seven children in custody in the country.

A spokesperson from Goodale’s office said the government would not confirm Amarasingam’s figures “due to the privacy act.”

All of the children born to Canadian women who left Canada to join ISIS are under the age of five, with several being under the age of one, Amarasingam told CBC News Network’s Power & Politics.

“The behaviour of the parents that have put those children in that situation is absolutely appalling and reprehensible,” Goodale said. “We will examine carefully what can reasonably be done to protect those who are innocent in these circumstances.

“But this is a situation that [ISIS] has created, and to which those who have gone to that part of the world to participate have also contributed, and they need to show to their responsibilities.”

The risk of ignoring America

Amarasingam said that the Syrian Defence Forces are not going to be able to hold foreign fighters in camps indefinitely and the U.S. may fear they’ll escape or be released before they can be returned to their countries of origin.

Amarasingam said the SDF could strike a deal with the regime of Syrian dictator Bashar al-Assad to turn the fighters and their children over for execution.

Jessica Davis and Amarnath Amarasingam on the logistics of the U.S. call for countries to repatriate foreign fighters and prosecute them at home. 11:34

Jessica Davis, former senior strategic analyst with CSIS, told Power & Politics that Canada has been avoiding bringing home its foreign fighters — but continuing to turn a blind eye to the situation will be more difficult now.

“Despite all of the dynamics around the Trump administration, the Americans are still our number one ally, particularly in the security and intelligence space, so this is the kind of thing that has to be taken very seriously,” she told Kapelos.