Canada’s oil and gas sector has slashed spending plans across the industry by $8.9 billion amid the economic fallout of the novel coronavirus, according to new estimates.

IHS Markit says while the bulk of the cuts have been made by large oilsands producers, there have also been “sizeable” spending reductions to conventional, unconventional, midstream and petrochemical projects.

It pegs the reductions in capital spending in oilsands alone at around $4.4 billion.

“Western Canada is accustomed to price volatility,” IHS Markit said in an analysis released Tuesday. “However, the scale of this demand shock is unprecedented.”

The impact on the sector, it adds, is expected to be “protracted, deep with long lasting ramifications” for the industry, jobs and the overall economy.

Canada’s oil producers have been hit hard by oil prices that have plunged worldwide.

OPEC and its allies tried over the weekend to shore up global prices with an agreement to cut back production, but concern remains it’s not nearly enough to address a massive fall in demand due to the pandemic’s economic impact.

Indeed, the International Monetary Fund’s latest outlook says the global economy is projected to contract three per cent in 2020, much worse than during the 2008-09 financial crisis. It expects world oil prices to improve in the coming years but remain well below last year’s average level through 2023.

In recent weeks, the price of heavy crude from western Canada has fallen to well below $10 US a barrel, prompting a number of major producers to announce deep spending cuts.

IHS Markit’s preliminary estimate indicates that capital spending in the upstream oilsands in 2020 may be at their lowest levels in over 15 years.

It also expects drilling activity in western Canada will fall further this year, adding it was already near record lows. IHS pegs the amount of capital spending cut by conventional and unconventional energy producers at more than $3 billion.

Alberta’s provincial government has said it expects Ottawa to come to the aid of the sector soon, including some form of credit backstop and help with cleaning up after orphaned oil-and-gas infrastructure.

It’s been weeks since Finance Minister Bill Morneau said assistance was “hours, possibly days” away. Prime Minister Justin Trudeau was asked Tuesday about when the federal government would deliver such a package.

“We will and we are looking at more specific, sector-related relief and supports for those sectors that are hardest hit, whether it’s the tourism sector, the airline sector or the oil and gas industry, or others,” Trudeau said.

“We will have more to say on that shortly.”


The president of oil and gas producer Whitecap Resources expects the mood in the office today will be “not good” after the Liberals were able to hold onto power with a minority government.

After the oilpatch celebrated the victory of the United Conservative Party government in Alberta in the spring, many in the sector were eager for a double dose of good fortune in 2019 with a Conservative victory on the federal stage.

Those hopes were dashed.

Not only did the Liberals win, but the minority victory adds an extra element of uncertainty.

Grant Fagerheim, with Whitecap, anticipates many of his employees will now be asking: “Where do we go from here?”

The oilpatch’s woes began before Trudeau was elected in 2015, but the sector has often complained about some of the Liberal Party’s policies such as the carbon tax, the proposed clean fuel standard, changes to how pipelines and other major projects are reviewed, and a ban on oil tankers off a part of British Columbia’s coast.

Some companies were holding back on making certain decisions, such as hiring and proceeding with projects, pending Monday’s election outcome.

“We have to definitely look at pulling back on spending,” said Fagerheim, adding further job losses in the sector would be “a travesty.”

The Conservative Party had made campaign pledges seen as much more friendly to the industry, such as an energy corridor across the country and much less stringent environmental policies.

Trudeau seemed to have a hot and cold relationship with the oilpatch. He visited the province every year since the 2015 election, including a few trips specifically to Fort McMurray. The Liberal government funded innovation in the energy sector and gave $1.6 billion in support to the oilpatch last year.

The Liberals also purchased the Trans Mountain expansion pipeline when it looked like the project was falling apart.

Still, the oilpatch never seemed to trust Trudeau, at least in part because of his father’s decisions decades earlier that crippled the industry — namely, the National Energy Program. The policy was aimed at asserting more federal control over the energy industry and contributed to substantial job losses in Alberta and a real estate market crash.

Trudeau’s comments about “phasing out” the oilsands in 2017 seemed to confirm his doubters in Alberta, even though the prime minister was talking about a slow transition away from fossil fuels.

The Trans Mountain purchase received limited support in Alberta, since many blamed the federal government for not supporting the project more before it had to step in as a last resort.

He anticipates companies will slash spending and investors will further shy away from the oilpatch.

“We’ve already seen the massive slowdown in drilling and overall activity. When you have a government that is strangling you out of existence, your risk tolerance just went out the door,” he said.

What the sector deems anti-energy policies of the last four years will continue, Cooper said, “especially if [the Liberals] are pushed from further on the left — then I think it’s clear the strangulation of Alberta and Saskatchewan’s resource-based economy will continue.”

What about that pipeline?

Besides low oil and gas prices, the biggest challenge for the sector is a lack of new export pipelines. Trudeau can hardly be blamed for some of the problems, since proposed projects like Enbridge’s Line 3 replacement and TC Energy’s Keystone XL are fully approved (and largely constructed) in Canada but are stalled in the U.S.

Critics have blamed the Liberals for the failure of other pipeline proposals, such as Energy East by TC Energy.

What happens now to the Trans Mountain project will be a prime focus for the oilpatch.

Political scientist Lori Williams, with Calgary’s Mount Royal University, said the project should continue to proceed since both the Liberals and Conservatives support the pipeline expansion and no vote is needed in Parliament as construction slowly ramps up.

Cooper, with Acumen Capital, isn’t making any assumptions, especially if the Liberals form a coalition government.

“It’s definitely not certain that Trans Mountain is a go.”

Oil export pipelines are at capacity in Western Canada and, as a result, the industry is receiving a discount price for its crude. Companies are ramping up oil shipments by rail to help alleviate the bottleneck.

While the energy sector and the Prairie provinces were of little focus during the federal election campaign, the oil and gas industry remains a key driver of the economy and the country’s largest export.

While the economy and job creation are thriving in most parts of the country, Alberta in particular continues to struggle. The unemployment rate is high, and more than 20 per cent of the downtown office towers in Calgary are vacant.

The city’s mayor is hopeful the Trans Mountain project will proceed following the election result, but he’s growing impatient.

“If they wanted to shut it down, they could have shut it down,” Naheed Nenshi said about the Liberals purchasing the pipeline project.

“But the point is it hasn’t been built yet.”

And with Bill C-69, which Nenshi says would infrastructure projects including pipeline more difficult to build, “you can see why people are getting frustrated.”

What Venezuelan turmoil could mean for Canada’s oilpatch


More turbulence in Venezuela — including the threat of United States sanctions on its crude oil exports — has Canada’s oilpatch watching carefully for how the impact will ripple across the industry.

Analysts say sanctions, or a further drop in Venezuelan oil output, could leave American refiners on the hunt for heavy crude from elsewhere, providing a potential price lift for Canadian producers.

But with limited ability to get more oil to the Gulf Coast, some believe the Canadian sector won’t be able to seize the additional market share it otherwise might.

“Any more reduction in Venezuela crude could have an impact on the price of heavy crude for Canadian producers,” said Kevin Birn, an oilsands analyst with IHS Markit in Calgary.

“In terms of our ability to maximize the benefit, we are constrained by our own infrastructure.”

Venezuela’s political and economic outlook is unclear as opposition leader Juan Guaido and interim president Nicolas Maduro struggle for control of the country.

Traditionally, Canada and Venezuela produce heavy oil that compete for space in the U.S. market. However, Venezuela crude production has fallen dramatically in recent years amid economic and political strife.

“They were getting most of their heavy crude from Venezuela and Mexico — and a little bit from Canada. Now, with the concerns in Venezuela, that means those refineries are looking north to Canadian producers.”

Fogwill said limited pipeline capacity and rising demand for Canadian crude at those refineries is one reason why rail shipments of oil to the United States have been on the rise. 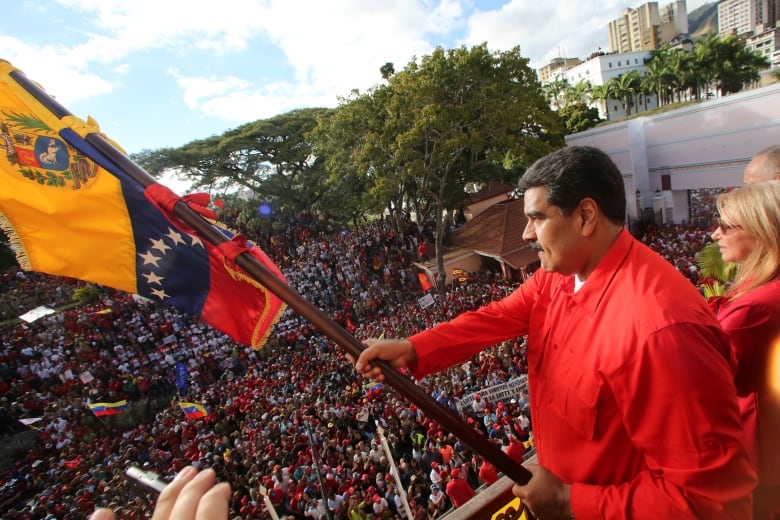 Maduro attends a rally in support of his government and to commemorate the 61st anniversary of the end of the dictatorship of Marcos Perez Jimenez in Caracas on Thursday. (Miraflores Palace/Handout/Reuters)

Last fall, Canadian shipping constraints to the U.S. led to a backlog of oil and steep discounts on Alberta crude. Prices increased significantly when the province imposed mandatory crude production cuts for 2019.

The heavy blend of oil from Alberta’s oilsands known as Western Canada Select was trading at $43.47 US a barrel on Thursday, up $1.36 US on anticipation that any decline in Venezuelan crude would result in more demand for WCS.

Rory Johnston, a commodity economist at Scotiabank, said the Canadian heavy crude price could further improve depending on whether the U.S. moves forward with sanctions and what happens with Venezuelan production.

“But I think at this stage it’s fairly unambiguously bullish for oil prices in the short term,” he said.

Robert Fitzmartyn, head of energy institutional research at GMP FirstEnergy, said he’ll be watching to see how any related improvement in crude prices filters into the market and Canadian energy stocks.

Longer term, however, there are even more questions.

If there is regime change in Venezuela, oil production could ramp up to more traditional levels and that might come to weigh on oil prices, Johnston said.

“What that likely would mean is actually a slightly more bearish outlook longer term,” he said.

“Production has been declining so rapidly there [in Venezuela] that really, at this stage, virtually any alternative governance is likely to be better at managing that production.”

Fogwill said that if Venezuelan production returns to traditional levels, it will have an impact on world prices, too.

“If Venezuela came roaring back … that could undermine the high price for oil.”