It’s a year in which families say they have lived through difficult firsts.

The first birthday since the crash. A first Thanksgiving. A first Christmas.

Family members of the 29 people involved in the crash and nearly 3,000 members of the public are expected to gather at the Elgar Petersen arena, the heart of hockey in Humboldt, Sask., to mourn together.

“It’s hard for me to believe a year is gone but I also say to so many people, it feels like I’ve lived a lifetime because this past year as we grieve, we are grieving publicly,” said Laurie Thomas, mother of Evan Thomas, one of the  hockey players killed in the collision.

Indeed, it’s a grief that has unfolded at the forefront of public consciousness. Stories about the crash, the recovery of survivors and most recently, the emotionally-charged sentencing for truck driver Jaskirat Singh Sidhu, have dominated national news coverage.

Those daily reminders of the crash have been painful for Marilyn Hay, mother of Tyler Bieber, who said she needs today’s memorial for her healing.

“I miss my son immensely. I can feel him with me. We’ve just got to move on, I’m thinking, after Saturday,” she said.

“To me, it’s coming to the end. It’s a full circle since the crash.” 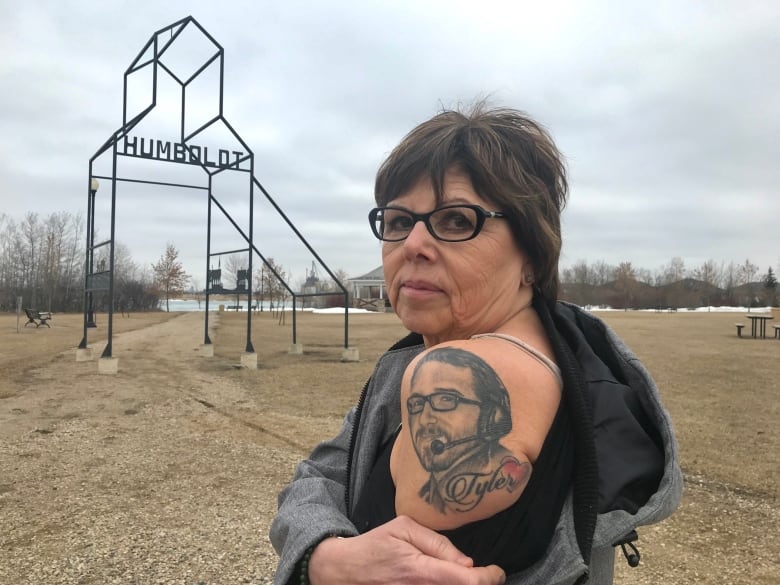 Marilyn Hay shows a tattoo of her son Tyler Bieber on her left arm. (Bonnie Allen/CBC)

For the family of Logan Boulet, Humboldt is calling them to come from their home in Lethbridge, Alta., to take part in the ceremony.

Logan is our son and we will always be here for him.– Toby Boulet , father of crash victim

Toby Boulet told CBC News that he and his wife and daughter are drawn to come to any gathering that remembers the 29 people aboard the bus. His son and 15 others passed on, while 13 survived with life-changing physical and mental scars they will live with forever, he said.

“When the community of Humboldt gathers to remember, then certainly a Boulet will be there,” Toby Boulet wrote in a message to CBC News.

“We cannot expect Humboldt to remember for us. Logan is our son and we will always be here for him.” 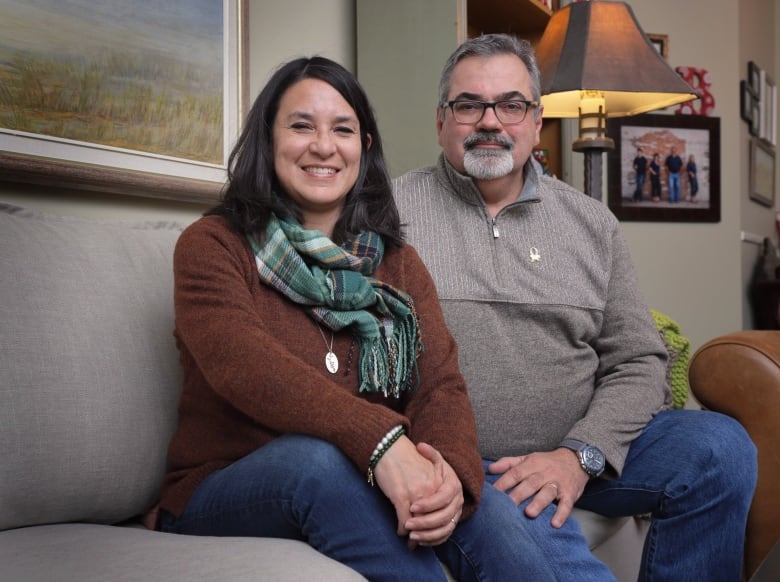 The game plays on

Thomas has spent the past year sharing photos and stories about her son on Facebook and Twitter, crafting a living reminder that survives beyond his death.

“Photos are such a good memory, but it’s also because I miss him at times, and I’m grieving because my heart is broken, because I physically miss his laughter, I miss his smile, I miss his hug,” she said. 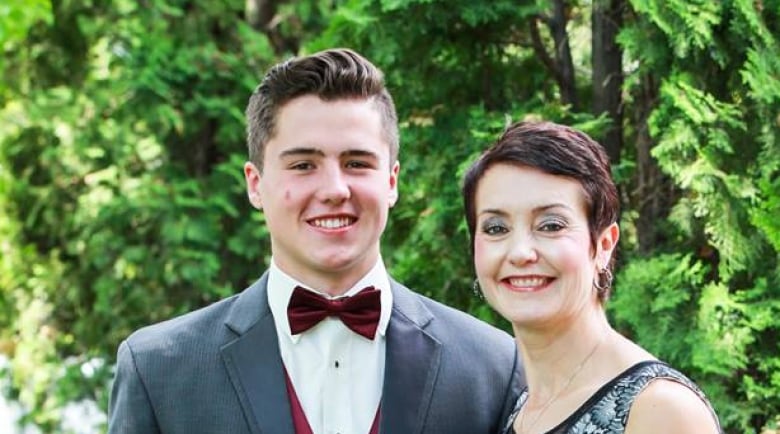 Laurie Thomas (right) said she has to live and fight on, because that’s what her son, Evan Thomas, would want her to do. (Submitted by Laurie Thomas)

Like Hay, Thomas said she hopes the anniversary represents a turning point, where the focus shifts from the tragedy to allowing her to move forward.

But life goes on after Humboldt. Thomas said she has a daughter to look after and her son’s legacy to uphold.

And there’s more left in the game to play.

“I can hear Evan go, ‘You’ve got to get up and conquer the world today mom — because that’s what you taught me.'”


Boeing anti-stall software repeatedly forced down the nose of a doomed Ethiopian jet after pilots had turned it off, sources told Reuters, as investigators scrutinize the role played by technology and crew in the fatal March 10 crash.

A preliminary Ethiopian report into the disaster, expected soon, may include evidence the software system kicked in as many as four times before the 737 Max dived into the ground, two people with knowledge of the matter said.

The software known as MCAS is at the centre of accident probes in both the crash of Ethiopian flight 302 and a Lion Air accident in Indonesia five months earlier that together killed 346 people.

It was not immediately clear whether the Ethiopian crew chose to re-deploy the system, which pushes the Boeing 737 Max downward to avoid stalling. But one of the sources said investigators were studying the possibility that the software started working again without human intervention.

The Ethiopian crash led to a global grounding of 737 Max jets and scrutiny of its certification process. Initial results of the accident investigation are due within days.

The stakes are high. The 737 Max is Boeing’s top-selling jet with almost 5,000 on order. Ethiopian Airlines is also in the midst of an expansion drive, while other 737 Max customers and victims’ families want answers, and potentially compensation.

Getting the planes flying again depends partly on the role that Boeing design features are found to have played in the crash, though investigators are also paying attention to airline operations, crew actions and regulatory measures.

People familiar with the investigation have already said the anti-stall software was activated by erroneous “angle of attack” data from a key aircraft sensor.

Now, the investigation has turned toward how MCAS was initially disabled by pilots following a checklist procedure, but then appeared to start working again repeatedly before the jet plunged to the ground, the two sources said.

Boeing issued guidelines to pilots on how to disable the anti-stall system after the Indonesian crash, reminding pilots to use cut-out switches in the console to shut off the system in the event of problems.

Cockpit procedures call for pilots to leave the MCAS system off for the rest of the flight once it has been disengaged.

The Wall Street Journal reported earlier that the pilots had initially followed Boeing’s emergency procedures but later deviated from them as they tried to regain control of the plane.

Disabling the system does not shut down the MCAS system completely but severs an electrical link between the software’s attempts to give orders to push the plane lower and the actual controls, a person familiar with the aircraft system said.

Investigators are studying whether there are any conditions under which MCAS could reactivate itself automatically, without the pilots intentionally reversing the cut-out manoeuvre.

Safety experts stress the investigation is far from complete and most aviation disasters are caused by a unique combination of human and technical factors.

None of the parties involved in the investigation was available for comment.

Then early Saturday morning, the Brampton, Ont., man departed for a trip that nobody would want to take.

His parents, sister, brother-in-law and two nieces were all killed last Sunday, when a flight from the Ethiopian capital of Addis Ababa crashed shortly after takeoff. None of the 157 people on board Ethiopian Airlines Flight 302 survived.

Along with his wife and two children, Vaidya is on his way to Ethiopia to collect the remains of his loved ones. Then, he intends to fly to India — where his extended family resides — for final rituals. He has been in frequent contact with officials at both the Canadian and Indian consuls to facilitate transportation of the remains.

“My priority is to get the closure, to the bodies, to the souls. I want to make sure that they rest in peace,” he said.

Vaidya expects to spend two days in Ethiopia, where he will try to help authorities identify the remains of his family members and visit the field where the Boeing 737 Max 8 slammed into the ground. He said Peel police collected a DNA sample from him on Tuesday that will be used to attempt to distinguish his relatives from the other victims.

He lost his father, Pannagesh Vaidya, 73, and his mother Hansini Vaidya, 67; his sister Kosha Vaidya, 37, and his brother-in-law Prerit Dixit, 45; as well as his two nieces Ashka Dixit, 14, and Anushka  Dixit, 13. The teenage girls, who were both students at schools in Peel, were his sister’s daughters. 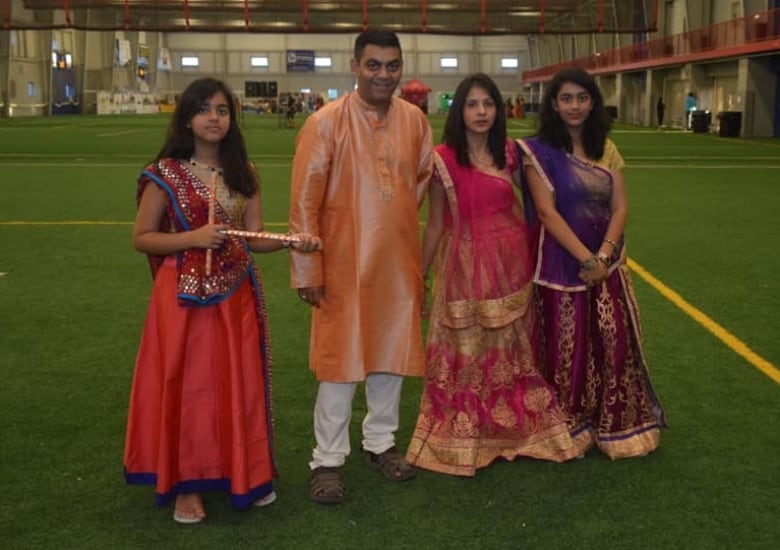 From left to right: Ashka Dixit, Prerit Dixit, Kosha Vaidya, and Anushka Dixit. The family was among those killed when a Boeing 737 Max 8 jet crashed in Ethiopia. (Pramesh Nandi/Facebook )

But he expects the tragic truth of the situation to hit him particularly hard in Addis Ababa.

“Once I get over there, maybe I will face reality. I don’t know what I’m going to do. I just want to get the closure and answers to all my questions about what happened and why it happened.”

Answers, however, could still be far off. A team of investigators in Paris have begun examining the black box recorders recovered from the crash site. Experts say it is too soon to know what caused the crash, but aviation authorities worldwide have grounded Boeing’s 737 MAX 8s and 9s in response.

Flight data has already indicated some similarities with a crash by the same model of plane during a Lion Air flight in October. All 189 people onboard were killed. Both planes crashed within minutes of takeoff after pilots reported problems.

Investigators have notified other families that it could take up to six months to identify their loved ones.

Vaidya says he eventually wants clarity about what led to the crash. But for now, he’s focused on his family. In India, he will gather with other relatives to say goodbye to those they have lost. 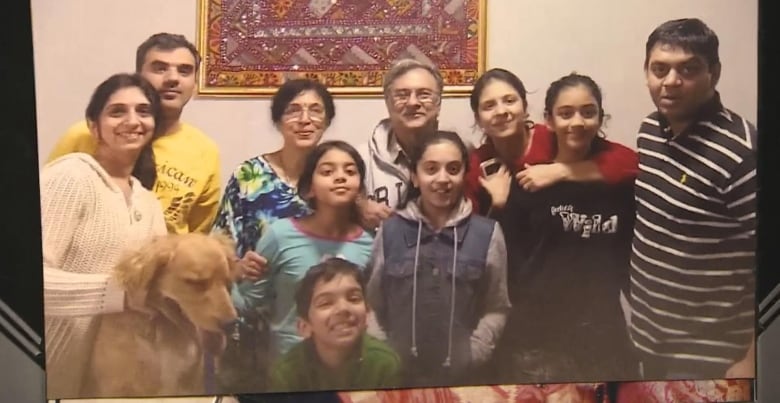 Six members of this Brampton family are among the dead in Sunday’s Ethiopian Airlines crash. (Garry Asselstine/CBC)