Among the hundreds of orchids on display in St. Albert at the 42nd Annual Orchid Fair this weekend, it takes a special kind of flower to stand out.

“Something may have tiny little flowers in the same category as something with great big flowers,” orchid judge Sandy Bedford told CBC’s Radio Active on Friday, as she sized up the competition.

“But they both have different potential so it’s a matter of who is living up to their potential.”

This is the largest American Orchid Society judged show in Canada.

Judges train for seven years to meet the international standards for evaluating these flowers.

For many orchids sellers, they’ve learned the trade over generations.

Ivan Portilla came to Edmonton from Ecuador for the event. His family owns Ecuagenera, a family-run orchid company that was founded in the 1950s.

Ecuador is home to 4,500 native orchid species, giving his orchids an advantage when it comes attracting buyers.

“People find it interesting growing the Dracula, or monkey-face, orchid,” he said.

Dracula — or, if you want to get fancy, one of the Pleurothallidinae subtribe of orchids — grow in South and Central American forests. The species, known for its flower centre that eerily resembles the image of a monkey’s face, is just one variety of rare orchids that Portilla’s company sells at fairs around the world. 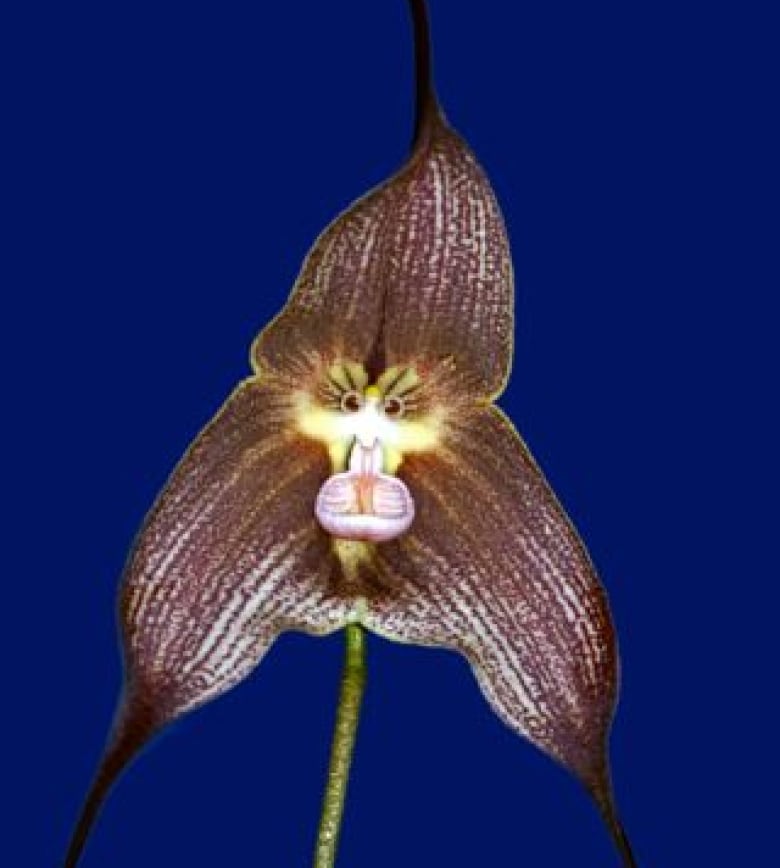 The Dracula Transilvania orchid which grows in Ecuador is known for its monkey face appearance. (Ecuagenera website)

The company travels to 72 different orchid shows every year, he said.

“I do about 24, in the U.S., Canada and Guatemala, some in Europe,” he said. The work is spread out among brothers, nephews and other members of his family.

This weekend, for example, Portilla and his family are attending five orchid shows: in addition to the one in Alberta, there are shows in Houston, Pennsylvania, Nashville and the last sibling is in Europe.

Shui-En Kao has been selling orchids since the 1970s and he said travel is part of life on the orchid circuit.

He ships the delicate flowers from Taiwan to Vancouver each year, then sends them on flights from fair to fair in Canada for his operation, Ching Hua.

“One year we came to Canada five or six times for orchid shows,” he said.

“Me and my son are always travelling. Last week Montreal and right now here in Edmonton.”

The orchid show runs through Sunday at the Enjoy Centre.