No Roll Up the Rim? Kids ask Tim Hortons to make contest greener


Three young people in Calgary are challenging Tim Hortons to roll up the rim for the planet.

Mya Chau and Eve Helman, both 12, and Ben Duthie, 16, are behind a change.org petition asking Canada’s iconic coffee chain to introduce a fully compostable or recyclable paper cup.

They also think the coffee chain, which has more than 4,600 stores worldwide and claims to sell two billion cups of coffee every year, can use its popular Roll Up the Rim to Win contest to encourage customers to bring in reusable mugs.

“We think that if they could make a better cup … then that would be great,” Helman said. “Because all their disposable cups are going into the landfills and affecting the environment.”

Roll Up the Rim to Win has been run by Tim Hortons since 1986, and this year’s version of the contest launches Wednesday.

The kids say the company could, for example, give people who bring in reusable cups two chances to win rather than just one, or it could move the entire game online.

“If Tim Hortons had some sort of electronic version of the Roll Up the Rim to Win, I think that would be a much more environmentally positive way to run the contest,” said Duthie. 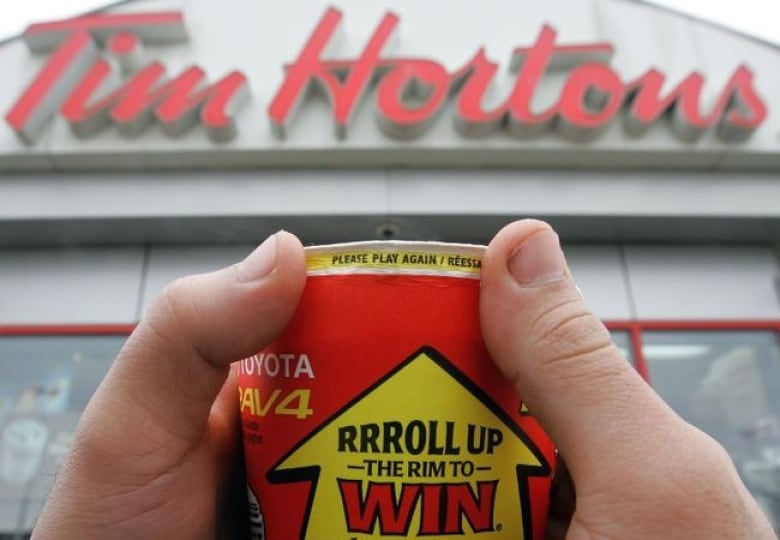 You don’t need to make a purchase to enter contests such as Tim Hortons’ Roll Up the Rim to Win. But sometimes the alternatives are just as costly. (Tim Hortons )

While theoretically the plastic-lined single-use coffee cups used by chains like Tim Hortons and McDonalds can be recycled, most municipal recycling systems aren’t equipped to do it. The kids say more than 600 billion single-use cups are produced worldwide every year and all companies need to find a way to be better about reusing, composting or recycling them.

The kids’ previous efforts to reduce waste from Starbucks have been successful. With Tim Hortons, they see the popular contest to be a unique challenge.

Duthie said he understands the contest would have to be rebranded if disposable cups were eliminated altogether.

“I do think that would be a challenge for them but I think it’s certainly possible,” he said.

Tim Hortons has had some electronic components of its game, including Scroll Up the Rim to Win, which was introduced last year on the company’s mobile app. The prizes on the app version were limited to coffee and doughnuts. The prizes available to people playing by rolling up the rims of their coffee cups include cars.

Chau said she knows using the app may be too large of a transition for some loyal Timmies customers.

​”They can bring in their own mug but they wouldn’t get the Roll Up The Rim challenge,” she said.

To keep those people involved, she suggested using stickers or a receipt that customers can scan. Or, she said, get on board with innovating a fully biogradable coffee cup, as other major brands have started doing.

Jane Almeida, a spokeswoman for Restaurant Brands International, which owns Tim Hortons, said in a written statement the company is working on a packaging strategy to reduce its environmental footprint, offers china dishes for customers eating in its shops, and has discounts for customers who bring their own reusable cups.

“Working closely with industry, Tim Hortons will also begin testing a new, strawless lid in 2019 and increasing the amount of recycled content in our packaging,” Almeida said.

Sarah King, head of the oceans and plastics campaign at Greenpeace Canada, said Roll Up the Rim is a fun contest that Canadians love but it inherently encourages people to use cups that will mostly end up in the garbage.

She said the company is in a good position to influence change given its popularity and loyal customer base.

Several restaurant companies are addressing concerns about plastic packaging. Starbucks last year began a quest to find someone to design a biodegradable liner for its coffee cups, a move that came after Chau and Helman petitioned it to build a better cup.

McDonald’s and Coca-Cola are partners in the Starbucks biodegradable cup challenge.

Chau and Helman say they haven’t received a satisfactory response from Tim Hortons yet. When they petitioned Starbucks, the company’s president met with them ahead of launching the better cup quest.

They hope all of Restaurant Brands International’s businesses, including Popeye’s and Burger King, will do what’s outlined in their petition.

Duthie also petitioned Starbucks to stop giving out plastic straws, and the company is phasing those out by 2020.

Their petition for Tim Hortons now has nearly 105,000 signatures.

With files from Rachel Ward and the Calgary Eyeopener.