Archaeologists expected the land surrounding Province House in downtown Halifax to be fertile ground for finding artifacts, but they never expected to uncover an underground stone vault roughly the size of a living room.

“It was a total surprise to the archaeologists and the construction crew,” said April MacIntyre, principal archaeologist, in recalling the work she supervised over three months last summer and fall.

The structure was discovered Aug. 7 during part of the work to remodel the grounds surrounding the Nova Scotia legislature.

Crews had already dug a series of trenches to install a new electrical system and run audio and video cables, when a backhoe hit what was assumed to be bedrock near the corner of Prince and Hollis streets.

“When they tried to break up the bedrock, it very quickly fell away,” said MacIntyre.

“What we discovered was an open, dry-stone-laid chamber with a semicircular, vaulted-type roof.”

In MacIntyre’s recently filed report to the government, she described the mysterious chamber as “a subterranean stone-walled feature measuring approximately six metres north-south by four metres east-west and approximately three metres high to the top of the silt that has collected on the floor.” 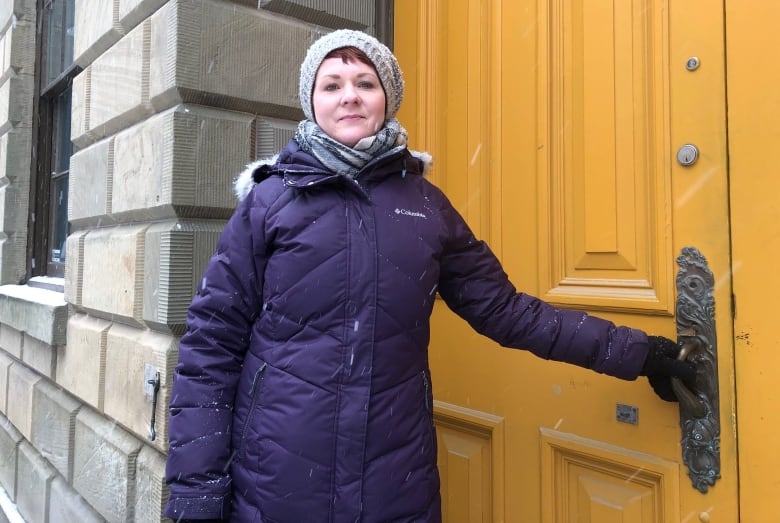 April MacIntyre stands at Province House in Halifax. She was the principal archaeologist on site during work to remodel the grounds last year. (Jean Laroche/CBC)

That’s an approximation, because it wasn’t deemed safe for crews to enter the chamber to gather precise measurements. They used remote cameras instead to investigate and photograph the chamber.

“The full extend to the top of the feature was not exposed and extended eastward beneath the lawn inside the fence of the property,” the report said.

There’s no record of anything of that nature being here on the property.– April MacIntyre , principal archaeologist

During the 48 hours she had to examine the structure, MacIntyre’s only access was the shoulder-width hole the backhoe had initially made.

Despite its size and prominent location, MacIntyre has been unable to find any information related to the structure, its origin or use.

“There’s no record of anything of that nature being here on the property,” she said. “No indications on maps or any records that we’ve been able to find.” 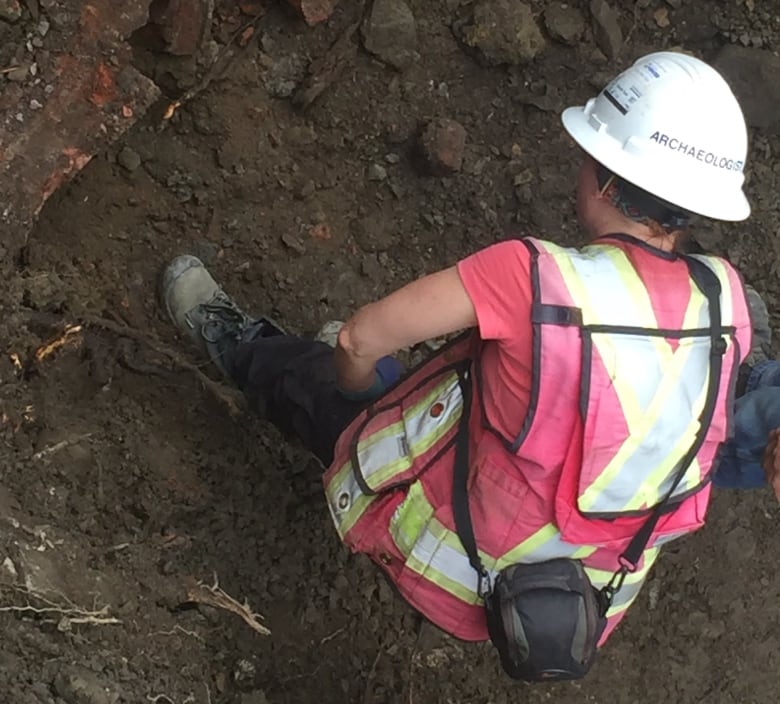 MacIntyre works on the grounds of Province House last July. She said the chamber discovered underground is ‘a pretty big room and quite deep from what we could tell.’ (Jean Laroche/CBC)

The only clues were artifacts found on the roof which dated to the very later part of the 18th century or early 19th century.

“We’re not entirely certain as to what it is, but it’s similar in construction to some powder magazines that were built around that period,” said MacIntyre, whose report noted a similar underground store was built in the late 1790s at Fort Anne in Annapolis Royal, N.S.

The entrance hole has since been covered over with a dark cloth and the area filled with crushed stone to mark the site.

Would MacIntyre have liked a closer look?

“Absolutely,” she said with a chuckle.

She has recommended the government investigate further using ground-penetrating radar.

“Future interpretive endeavours may also be possible and may include further archeological excavation of the feature, though it is believed to be stable at this time and, therefore, essentially mitigated,” said her report.

Lynette MacLeod of the Department of Communities, Culture and Heritage, said the report is still being reviewed, and next steps have not yet been determined.

Overall, the excavation work and subsequent examination by archeologists unearthed a total of 1,534 objects, many of them glass or pottery. Some of the fragments have been pieced together to form half-finished bowls, goblets or basins.

“It’s actually unusual how complete some of the material is,” said MacIntyre, who found most of it in a midden, or local dumping ground, adjacent to where MLAs park their vehicles.

All of it has been identified and catalogued and will be handed over to the province for safekeeping. Some of it may be displayed, but most will be stored.

Much more to discover

There are plans to, some day, rip out the paving on the parking lot side of the building to change it into a park. MacIntyre said she would love to have access to that land, given what archaeologists uncovered when part of the lot was dug up this past summer.

“There is now buried a portion of a stone enclosure wall which we think may have been related to either the governor’s cottage or the later governor’s mansion,” she said. 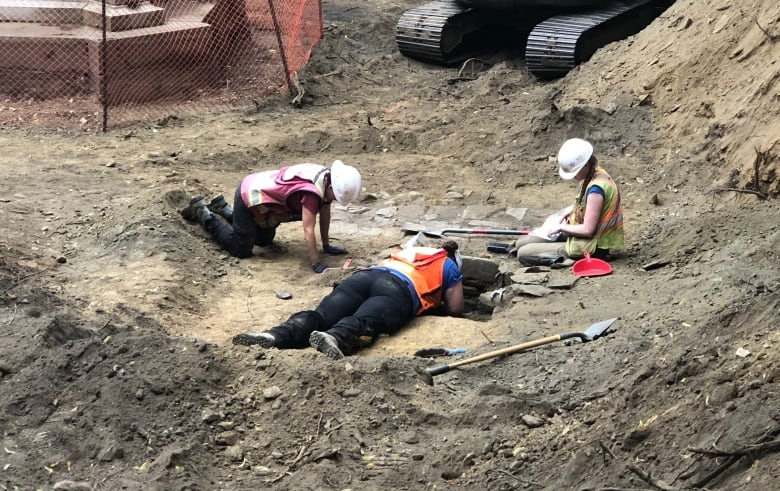 Archaeologists try to get a closer look at a well discovered on the grounds of Province House. (Jean Laroche/CBC)

Those structures were among the first and most prominent buildings in Halifax around the time of its founding.

“So the fact that we are still seeing those sorts of resources intact tells us that there may also be remnants of the cottage and the mansion, potentially outbuildings as well.”