Some of the world’s top marine biologists are meeting in Moscow this week to try to save nearly 100 whales — including 11 orcas and 87 belugas — held captive since autumn in what critics have dubbed Russia’s “whale jail.”

Since November, the cetaceans have been kept in small pens, which are often on the verge of freezing over, in a bay not far from Vladivostok on Russia’s Pacific Coast.

The whales were captured by several Russian companies intent on selling them to Chinese aquariums, a practice that until now has been perfectly legal in Russia.

“These are conditions that the animals shouldn’t be in. Their health is slowly deteriorating,” said Grigory Tsidulko, a marine mammal expert who’s been consulting with Greenpeace over the fate of the creatures.

The team arriving in Moscow on Thursday is headed up by Jean-Michel Cousteau, the 81-year-old son of the famous French oceanographer Jacques Cousteau. The group, which includes international experts as well as some of Russia’s top whale researchers, is expected to travel to Vladivostok over the weekend to survey the health of the whales and present options to Russian authorities for releasing them.

A public outcry led by animal welfare activists in Russia and supported by Hollywood celebrities such as Canadian-born animal welfare campaigner Pamela Anderson, pushed the government of President Vladimir Putin to pronounce that the whales should be freed.

If that happens, biologists say it could be the largest mass release of captive cetaceans ever. But many who’ve been following the saga of the “jailed” whales have their doubts it will. 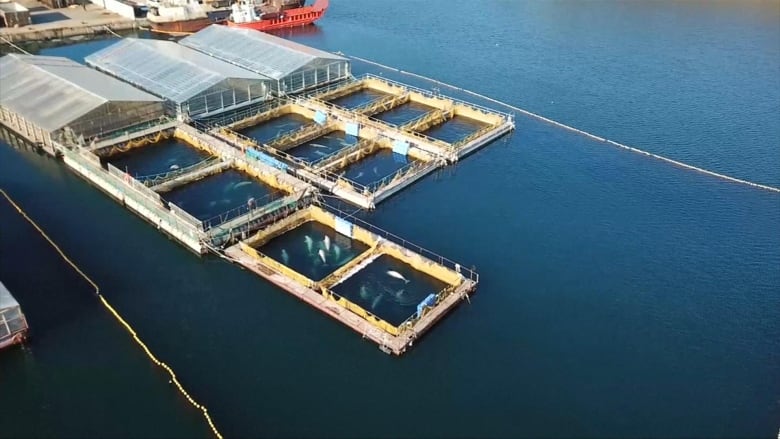 An overhead view of the pens holding belugas and orcas at the facility in Srednyaya Bay, in southeastern Russia. (Reuters)

There’s also a growing debate about whether the animals could survive. “It would be absolutely irresponsible if you just open the pens and let those whales swim away,” said Tsidulko, noting that orcas are highly social creatures and maintain close family units in the wild.

Russian environmental groups have been pushing the Putin government for years to stop the trade in ocean mammals. The four companies that captured these animals were issued legal permits to keep the whales for “educational” reasons. They then quickly turned around and cut deals with Chinese marine parks, where an orca can sell for up to $5 million US each, according to several animal welfare groups that have investigated the practice.

Marine parks have been rapidly expanding in China, with more than 60 already operating and dozens more in the planning stages. The environmental group the China Cetacean Alliance claims 491 marine mammals have already been put into captivity in the country.

Statistics from the Convention on International Trade in Endangered Species (CITES) suggest as many as 13 orcas caught in Russian waters were sold to China between 2013 and 2016. 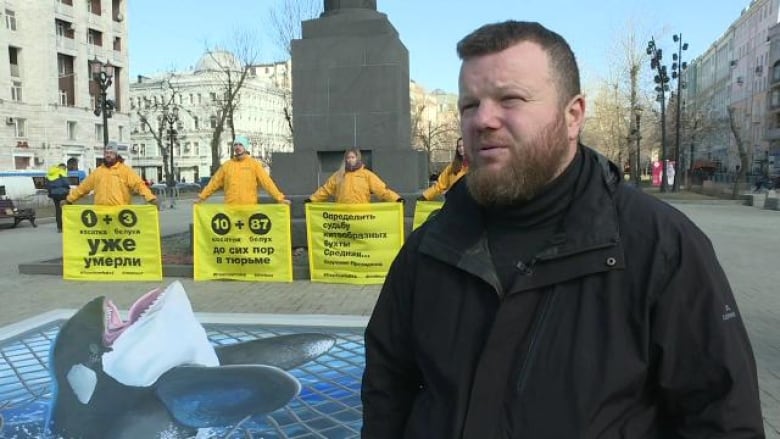 Marine mammal expert Grigory Tsidulko has been consulting with Greenpeace over how the captive whales should be freed. (Pascal Dumont/CBC)

In April 2018, Russia passed a new law to close a loophole allowing the “educational” capture of belugas and orcas. Tsidulko said it’s unclear how the new rules are being enforced, and whether companies will use other parts of Russia’s fishery act to continue catching whales.

Russia’s fisheries department does not consider orcas or killer whales to be endangered species.

Russian police intervened to stop the sale of the whales in the Vladivostok pens last month, claiming the companies didn’t have the proper permits, leaving the animals in limbo.

Many of the whales were captured near Sakhalin Island in the Sea of Okhotsk, which is more than 1,500 kilometres away from where the sea mammals are being kept now.

Russian authorities have suggested the companies responsible may need to lift the whales onto barges and transport them back to the places where they were captured. However, the region won’t be ice-free — and thus easily accessible — until the summer.

There are also concerns that the youngest belugas, some of which were babies when they were caught, have become too accustomed to being fed by humans in the months they’ve been in captivity.

Tsidulko said his fear is that some, perhaps even most, of the whales may be deemed “non-releasable,” and end up being sold to clients in China.

The video below shows some of the whales being held in captivity:

Since November, beluga and orca whales have been kept in small pens not far from Vladivostok on Russia’s Pacific Coast. 4:06

All of this has led activists to wonder how many of the whales will ever live in the wild again.

Later this month, the fisheries department will hold public hearings on setting a total allowable catch (TAC) of 10 orcas and 82 belugas for 2020.

While some of the animals may be slaughtered and used for food by Indigenous communities, Tsidulko laments the fact that Russia “remains one of the few countries that sells live cetaceans for public displays and shows.”

“On the one side, we are saying that they are so intelligent and so much like humans. On the other hand, we’re saying if someone wants to have a 20-minute show with a bucket of popcorn, then we can catch them and bring them for public pleasure. There’s something really wrong with this.”

In Canada, a bill that would ban aquariums from having dolphins and whales in captivity has already passed through the Senate, and is now in the House of Commons. Critics, including the owners of Marineland in southern Ontario, have said the bill will hurt science and legitimate research programs.

Vancouver’s Aquarium, which used to keep orcas and belugas for public performances, also initially strongly opposed the legislation. It no longer puts the whales on public display.